Back in February 2017 I decided it was time to do a case study for the Japanese Cosmo Facelift treatment I trained in 2015.  Although I’ve done many treatments of this type – which is an off shoot of Facial Reflexology Sorensensistem, but aimed at improving the appearance with anti-aging techniques (please see my JCFL page for more info) – so, far, no-one had signed up for a lengthy course of treatments. Many ladies treat themselves every now and then, and a few have had treatments once every few weeks but no-one had experienced a weekly treatment in an attempt to really try and defy the signs of aging and make them look and feel better.  Everyone notices a difference after only one treatment and I was intrigued to test out how good it actually was.

So, I asked my followers on Facebook if anyone would be interested in a course of 8 treatments at a huge discount (£80 to cover costs compared to £360 (£45 a session)).  I asked interested parties (preferably women aged 40-60 years) to send me a bare faced selfie so I could choose someone who I thought I could really help.

8 beautiful ladies were brave enough to send me their pictures and agreed to commit to 8 sessions and allow me to share progress pictures and use any photos for marketing purposes.  It was a really hard decision as I thought all those who sent in pictures would have been great candidates.  But I chose the lovely Julie…. 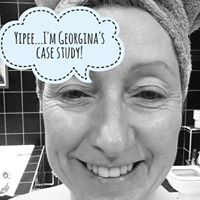 After treatment one I was amazed at the difference after only one session.  There was an amazing improvement in the forehead and under the eyes.  The fine lines on her cheeks were less defined and the lines between her eyebrows had almost vanished.

I was so excited I shared a shot of Julie’s forehead and promoted it on Facebook (something I’d never done before.  Note to self, make sure you set a limit on how much you want to pay.  5 days and £24 later I figured out how to stop the promoted post.  I thought I’d only done it for one day!  Idiot).  And what a waste of money that was.  Although apparently 6,000 people saw the post, it also had its issues.  A couple of comments said the pictures looked fake, tampered with and that I was trying to fool people.  I was mortified.  In hindsight, the after picture was slightly blurry around the edges, a fact I hadn’t noticed at all or wouldn’t have used it, but still I think the changes and improvement were obvious.  As did lots of other people.  What do you think? 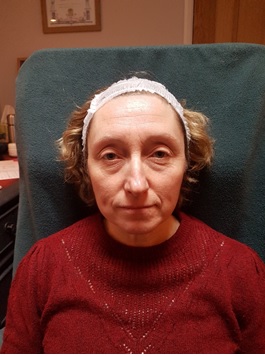 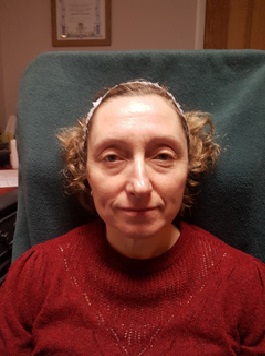 It was a lesson learned and I made sure every future photo was as clear and consistent as possible.  Same angle, lighting, facial expression.  To be honest the photographs caused me a lot of stress!  But anyway.  I hope you feel they show an honest and genuine account of each treatment.

Julie reported that she had felt awesome the day following the first treatment.  She’d slept well and was feeling good, although she had developed a cold sore on her top lip.  This area was completely avoided to avoid cross infection.  Some therapists may have refused to treat but as long as I didn’t touch the area which was only tiny, this was not a problem.  Julie said she hadn’t noticed much difference in her appearance since the last treatment. 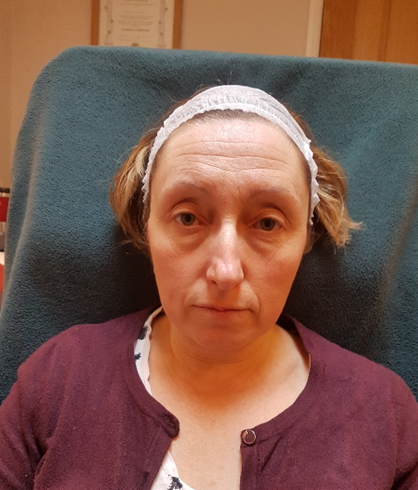 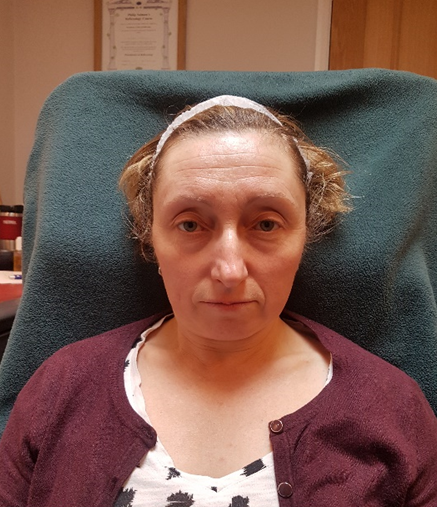 There seems to be a bit of improvement under the eyes and between the eyebrows…the WTF lines, as my darling friend Bekki likes to call them.  But in all honestly I was a bit disappointed after the success of T1 and  wondered if it was the lighting after all.  Anyway, onwards and upwards.

Julie’s cold sore was still there (although I couldn’t see it!) but it hadn’t erupted or grown.  She said she’d felt good after the last treatment and her stress levels were better but she’d not noticed a great change in her appearance. 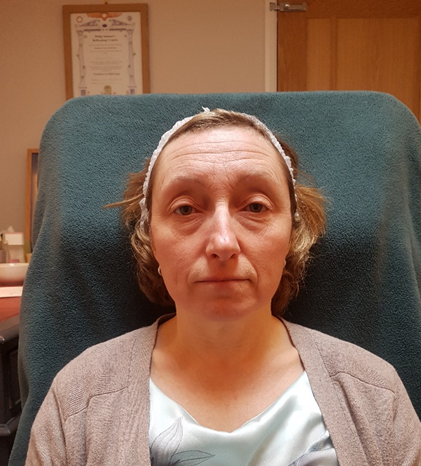 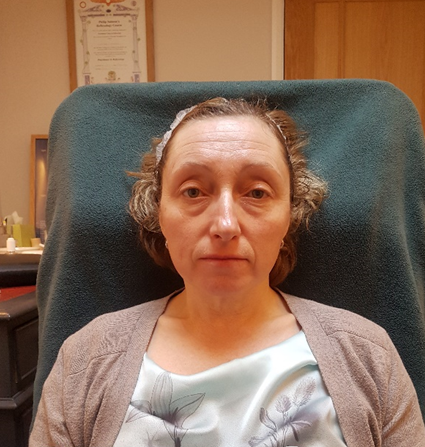 The forehead lines seem less deep and the fine lines less prominent.  Also, I think her jowls have lifted some.

When Julie arrived she advised that other people were starting to notice a difference and a few friends had commented on how great she looked.  This pleased me very much as sometimes others notice what we don’t. 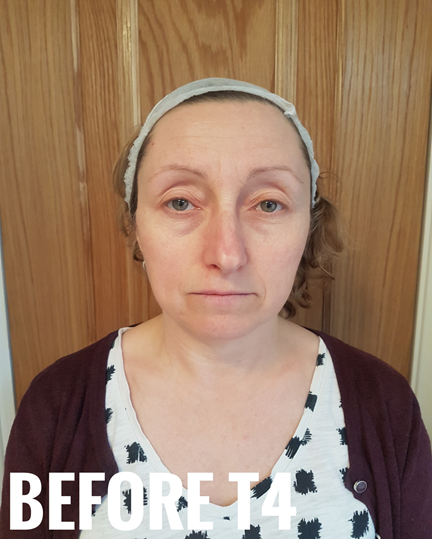 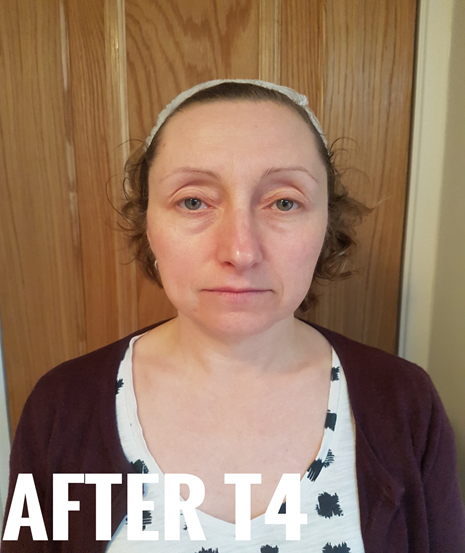 The skin is a lot smoother and we’re really starting to see a difference.  I was advised by a photographer that the best way to get consistent photos was to take them away from natural light, so we moved towards the door which is in the corner and away from the skylight.

Although I felt the treatment was going well, in my training, we were advised to encourage people to booked 2 appointments a week for the very best results.  In reality this is probably an impossibility for lots of people when you consider the cost and time involved but as the school holidays were fast approaching we decided to do two a week for the remaining four treatments.

Julie didn’t feel great when she arrived.  She’s developed bit of a cold a few days after the treatment and had felt very achey and tired and a bit rubbish.  She’d had an early night and felt a bit better since but her energy was still quite low.  I included techniques to boost the immune system and a thyroid link to improve energy levels. 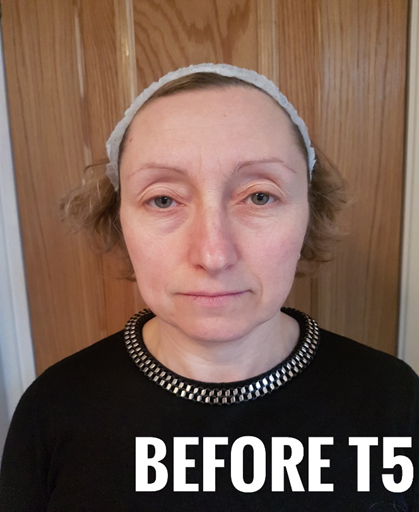 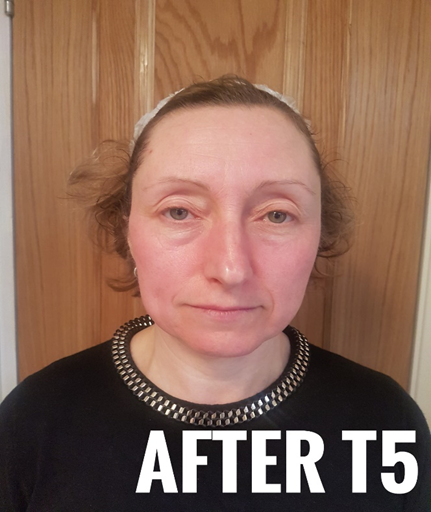 Treatment 5 was a bit of a disaster.  Well not really, but Julie left the building rather red faced.  Literally.  I’d run out of my usual rose water toner, which I use to mix the rose hip face mask and was using a different brand.  I’d already used it to cleanse Julie’s face, as I do at the start of every treatment, so thought it would be fine to use.  Julie didn’t say anything while the mask was on but  when I sponged it off, I noticed that her face looked very red.  Almost sunburned.  At the end of the treatment I asked how the mask was and she said it stung a little, whereas it hadn’t before.  Julie was quite red and said her skin still felt very warm, like she’d been in the sun for too long.  I assured her it would calm down soon (hopefully!) and figured the rose hip mask had reacted with the rose water for some reason.  Very strange as both are natural quality products.  So, another lesson learnt…if using new products, test them on yourself first!  But that aside, again I think the improvement in skin tone and texture are obvious.

Thankfully, the redness from treatment 5 had only last a couple of hours and Julie’s friends commented on how good she looked (once the redness subsided).  Even in the before pictures, Julie’s skin appears to be less lined and the deeper lines in her forehead less prominent.  Her eyes seem wider and brighter. 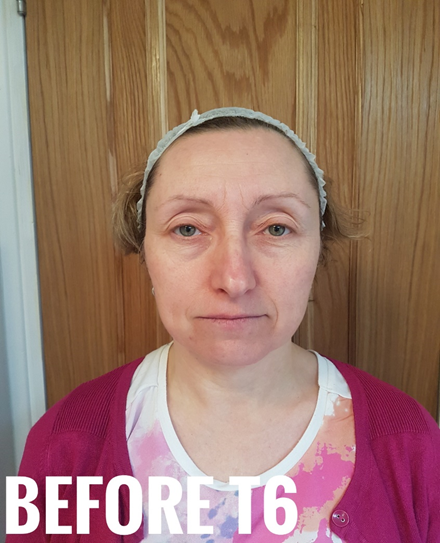 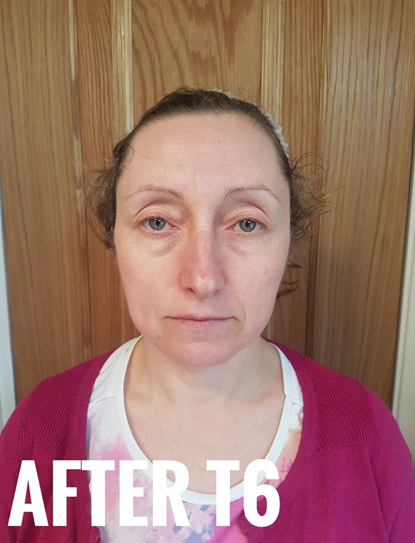 Julie had had a bit of a stressful week and had developed a bit of a cough.  She felt ok but was worried for her singing voice as she sings in the Whitstable Soul Choir and had a concert coming up and felt ok just a bit croaky.  I included work on the thymus, spleen and lymphatics to help boost the immune system as well as the throat reflexes. 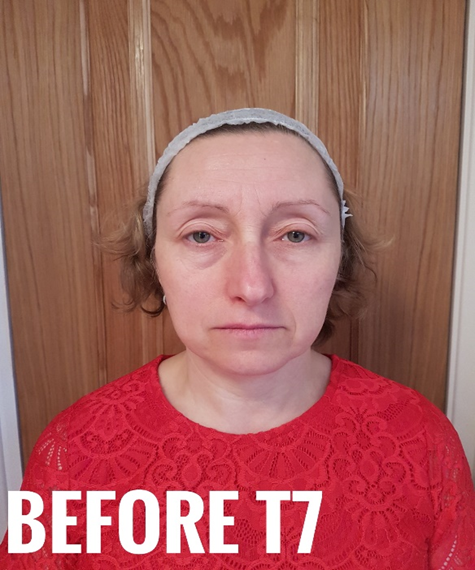 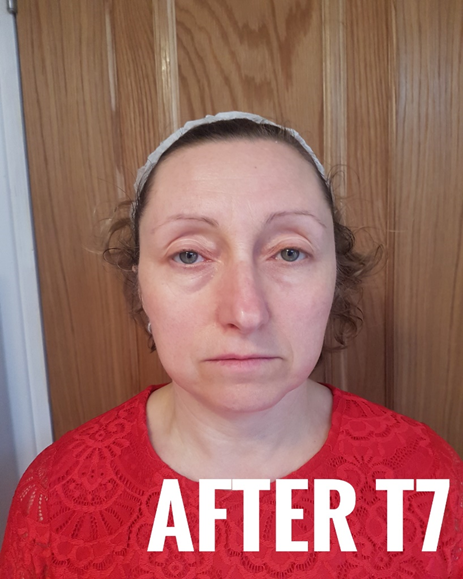 Julie had had a headache at the back of her head since Saturday and wasn’t feeling quite the ticket.  During this treatment I included a lot of work on the neck and spine reflexes as well as the Bergman method head reflexes.  Julie’s headache had gone by the end of the treatment. 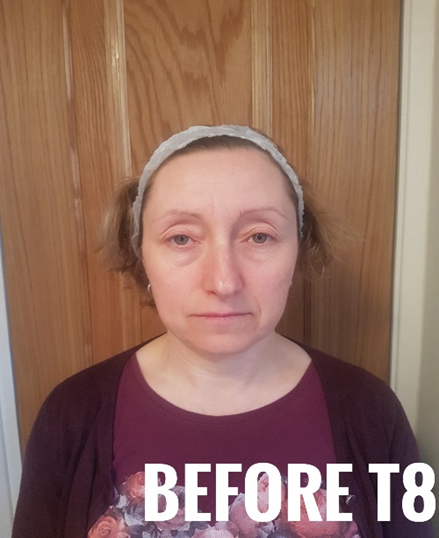 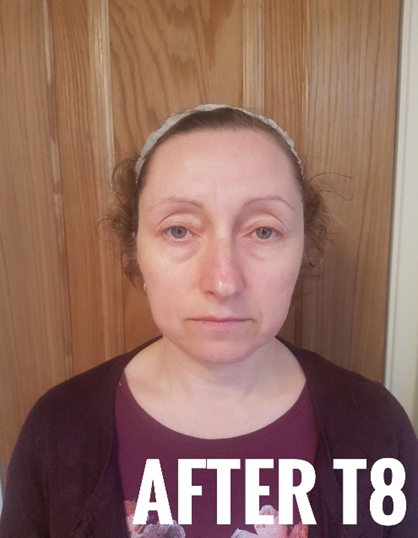 I think the results after this last treatment were brilliant.

So here’s the final results and the difference between the first and last treatments.    I am super pleased with how things went.  And hope Julie is too. 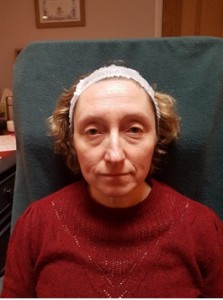 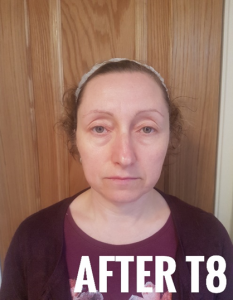 The picture on the left was taken before any treatment.  Julie was sat in my treatment chair which is situated under a skylight giving natural day light.  The final picture was taken away from the skylight and natural daylight by the door. The room is still lit through the skylight.  No lights were on.  Again, hindsight is a wonderful thing and I stupidly should have thought of it at the time (especially as I’d gone to so much trouble to keep the pictures consistent), and I should have taken another final shot of Julie in the chair under the skylight as per picture 1.  Anyhow, I believe the difference between the first and last pictures are obvious, with improvements in many areas, mainly in the fine lines around her cheeks, the forehead lines and under the eyes.

Julie says of her experience:

I really enjoyed the treatment and found it very relaxing. I always looked forward to the sessions and came away feeling better for having been. There were noticeable differences in the lines on my face and I noticed my skin had an almost youthful glow to it. I would never opt for any evasive treatment so this natural and holistic way really suits me. I will be keeping up the sessions and would highly recommend Georgina and her magic hands to anyone wanting a natural approach to their health, well-being and appearance.

So following the success of this study, I’d encourage anyone wanting to give it a go to book 4 treatments, one every 5-7 days if possible, and then see if you want to book 4 more.  It won’t work for everyone and I can’t offer any guarantees but I hope these pictures will persuade you to give it a go.  Japanese Cosmo Facelift is so much more than just an anti-aging facial.  As it’s based on Facial Reflexology Sorensensistem and meridianology, it helps the body regain balance, and promotes health and wellbeing. If you wanted a bespoke treatment incorporating Sorensensistem and Bergman methods to help with any health related issues, this can easily be arranged as you could have a 75 min session for £55 in combining with other facial reflexology techniques or foot reflexology.  If you have any questions, please email me or visit my Facebook page here.

Thanks for reading (all the 1701 words…hope you enjoyed it!)